The owner of this 1957 Raleigh wanted to get this classic back on the road for leisurely rides to the local post office.  This bike has the larger 23" frame, rod brakes, enclosed chaincase, 3-speed Sturmey Archer "AG" rear Dynohub (dated October 1957), and Brooks B-66 saddle.  A check of the Raleigh 1957 catalog indicates this particular bike with this equipment is probably a Dawn Tourist model.

Unfortunately the front and rear lamps and Dry Battery Unit were missing.  The front brake pads and anti-vibration plates were missing, and the shifter cable anchorage was missing. The rear of the enclosed chaincase was mangled from the 18 tooth cog coming loose at some point.  The owner only wanted to get the bike in rideable condition and not disturb the patina (rust and dirt).

Since the bike was missing all of the lighting equipment is was determined to switch out the heavy, notchy "AG" hub for an "AW" hub and rims from a donor Raleigh Sports bike.  The rod brake pads were replaced and shimmed for proper contact with the cleaned and polished Westrick rims.  The chaincase was removed and straighten, the shifter cable anchorage and new indicator were installed, new 19 tooth rear cog installed, and all hubs cones adjusted.  After installing new tires, tubes and chain the old classic was again rideable and ready for the road. 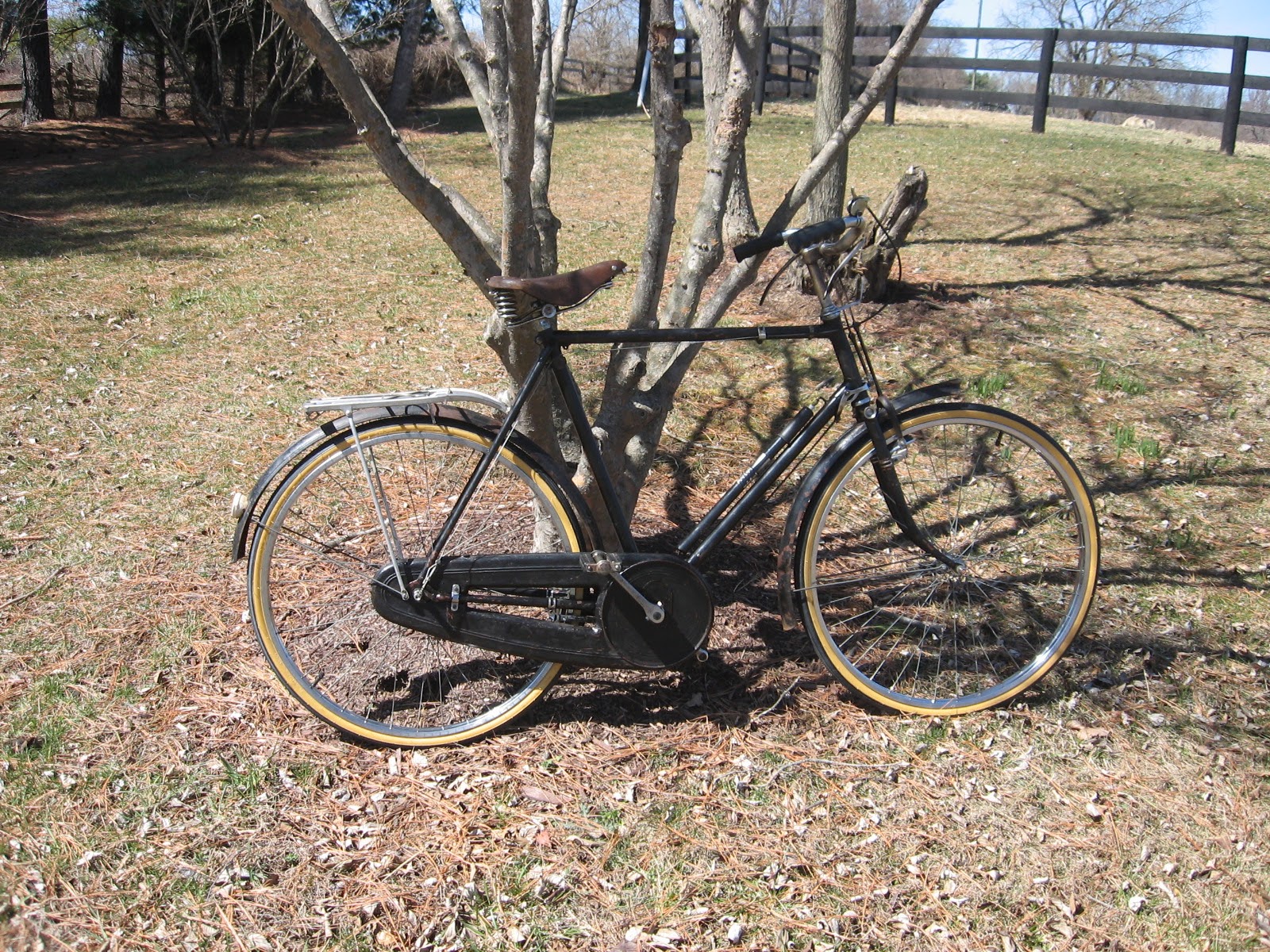 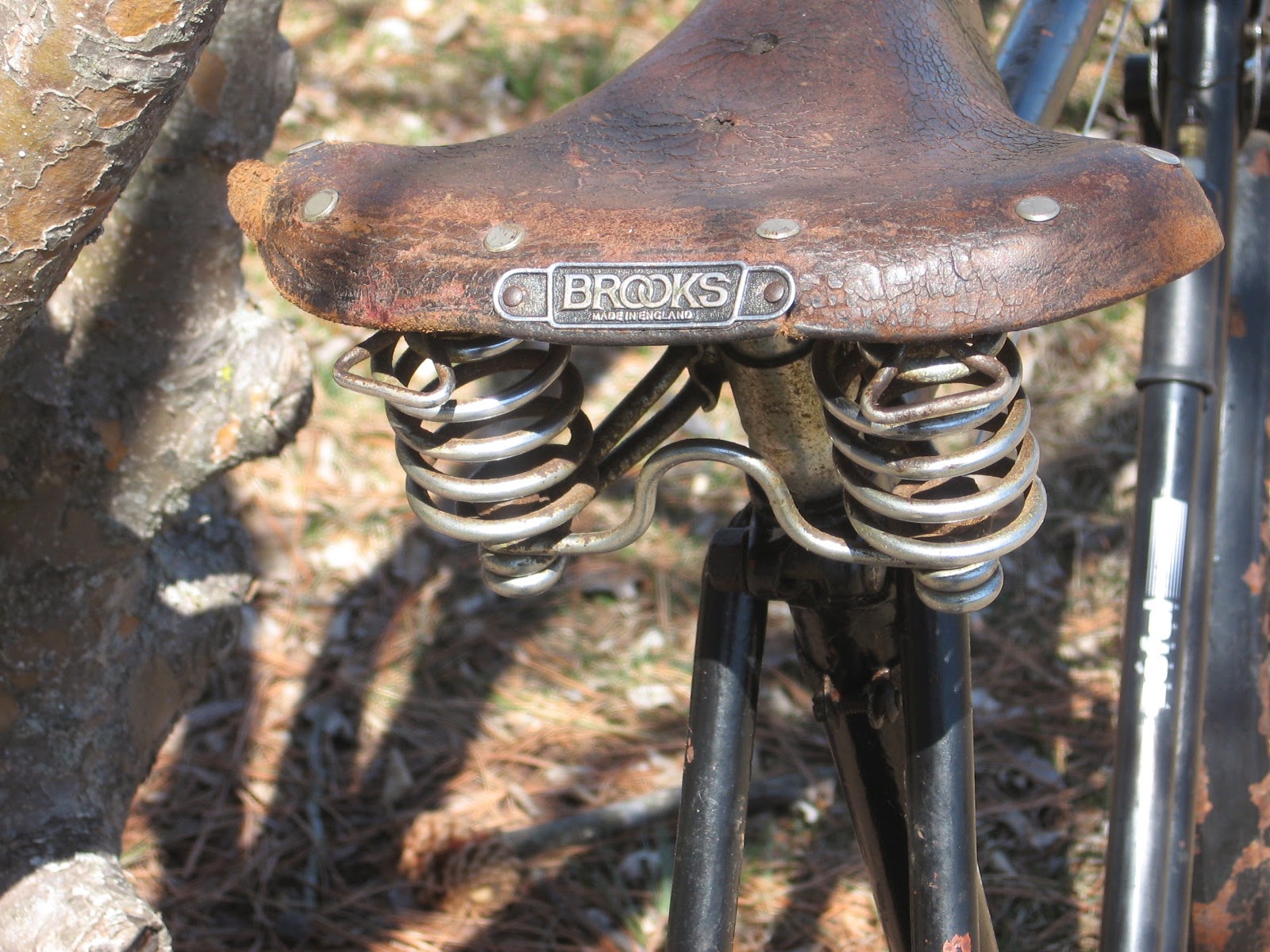 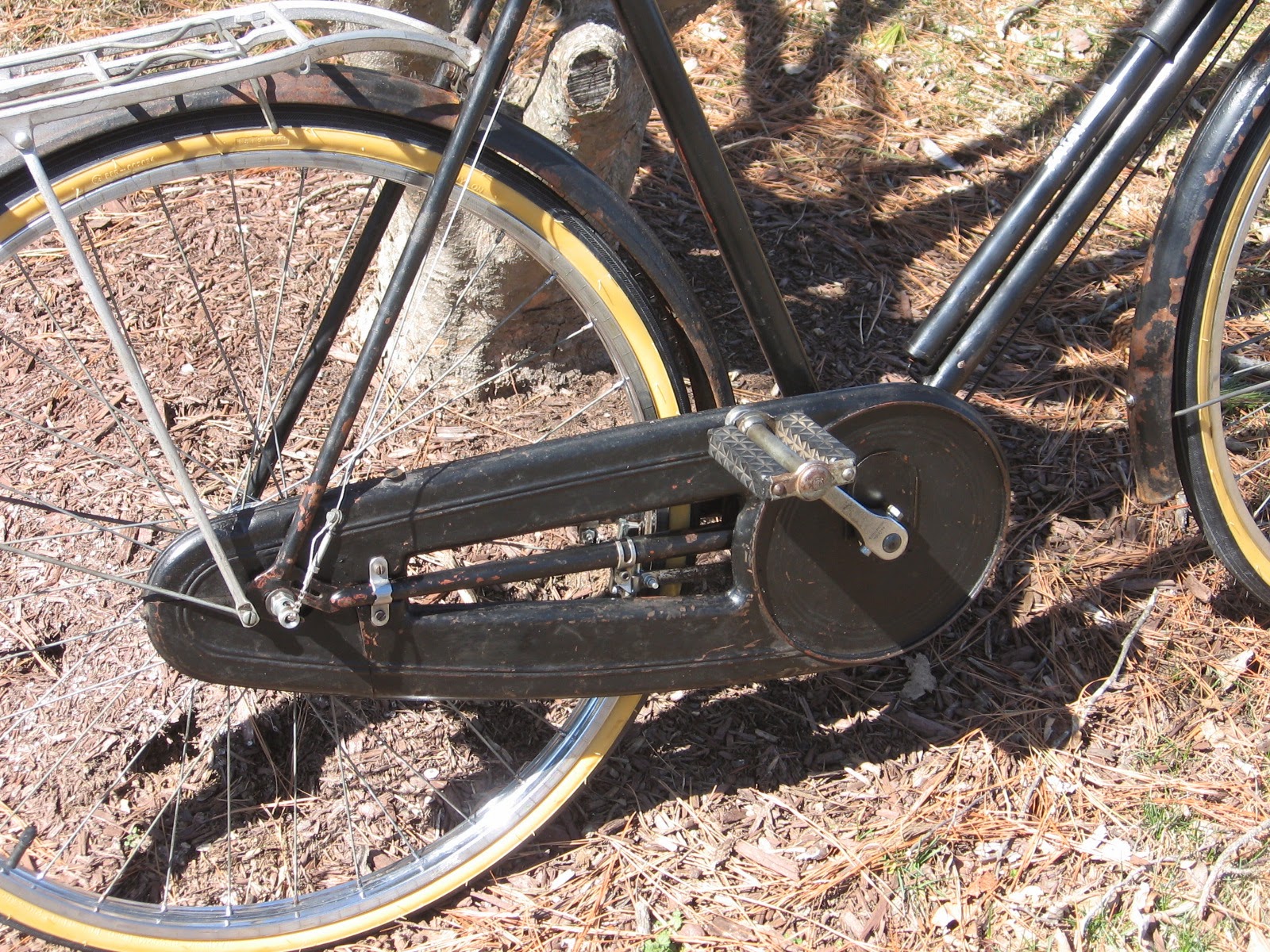 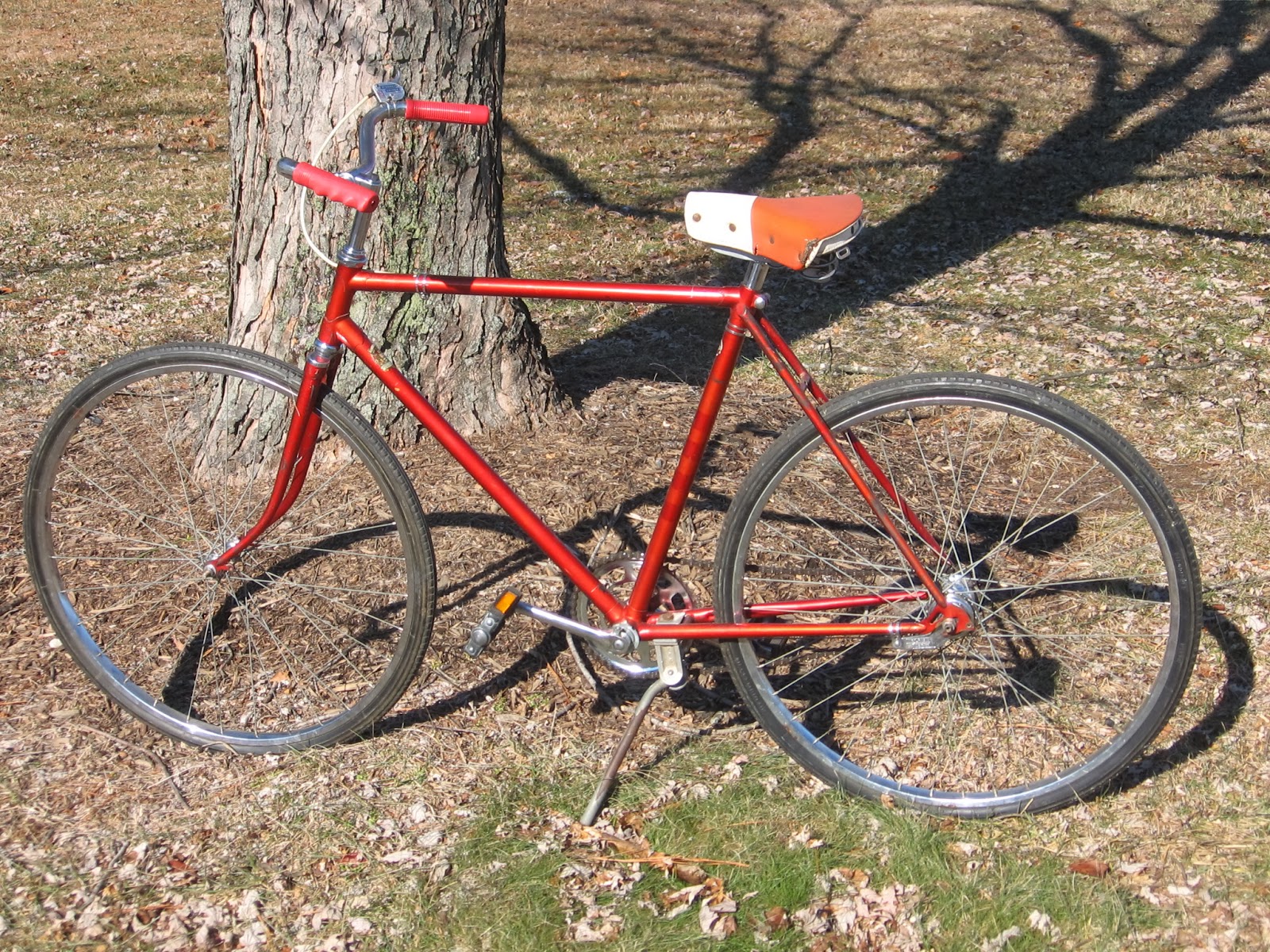 This is an 1963 AMF/Hercules three-speed my son acquired from a local flea market.  A typical example of one of the many budget version three-speeds exported to the US by Raleigh.

Raleigh had acquired most of the smaller British bicycle manufacturers by the late 1950's, including Rudge-Whitworth, BSA, Triumph, Robin Hood, Gazelle and others.  Raleigh Industries, along with Tube Investments (TI) which owned Hercules and Phillips comprised the majority bicycle manufacturing in the UK.  In 1960 Raleigh Industries was purchased by and was merged into TI .

Before the merger TI had been exporting re-badged budget versions of their bicycles to the US manufactures, chain stores, and mail order companies, These were sold under the customer's own brand name. This practice of exporting re-badged budget versions of brand named English three-speed bicycles continued after the merger with Raleigh.  This is an example of a bike exported to the American Machine and Foundry (AMF) company and marketed as an Hercules/AMF three-speed.  AMF had its own RoadMaster bicycle line but these where the typical heavy single speed American balloon tired bikes. Importing a three-speed allowed them to compete in the expanding US market for light weight "English Racer" type bikes. These budget versions were manufactured at the Raleigh plant at Nottingham.  The frame was the same as used on the Raleigh Sports. Typically they had a brand unique headbadge and transfers, mattress saddles instead of leather, a generic chainwheel not containing any brand names, initials,or symbols in the web of the chainwheel.  These chainwheels were similar to the Williams "utility" model F170, found in catalogs of the period.  A more generic fork with a chrome crown, instead of the iconic Raleigh tube fork, Endrick rims instead of the Raleigh Westrick type rim, and no air pump pegs or chaincase bracket braze-ons.  They did come equipped with a Sturmey-Archer three-speed hub.

This particular bike is missing the fenders and chainguard, but since my son intentions were to create a "racer" type build. they won't be needed.  It has a Sturmey-Archer "TCW III" three-speed hub. 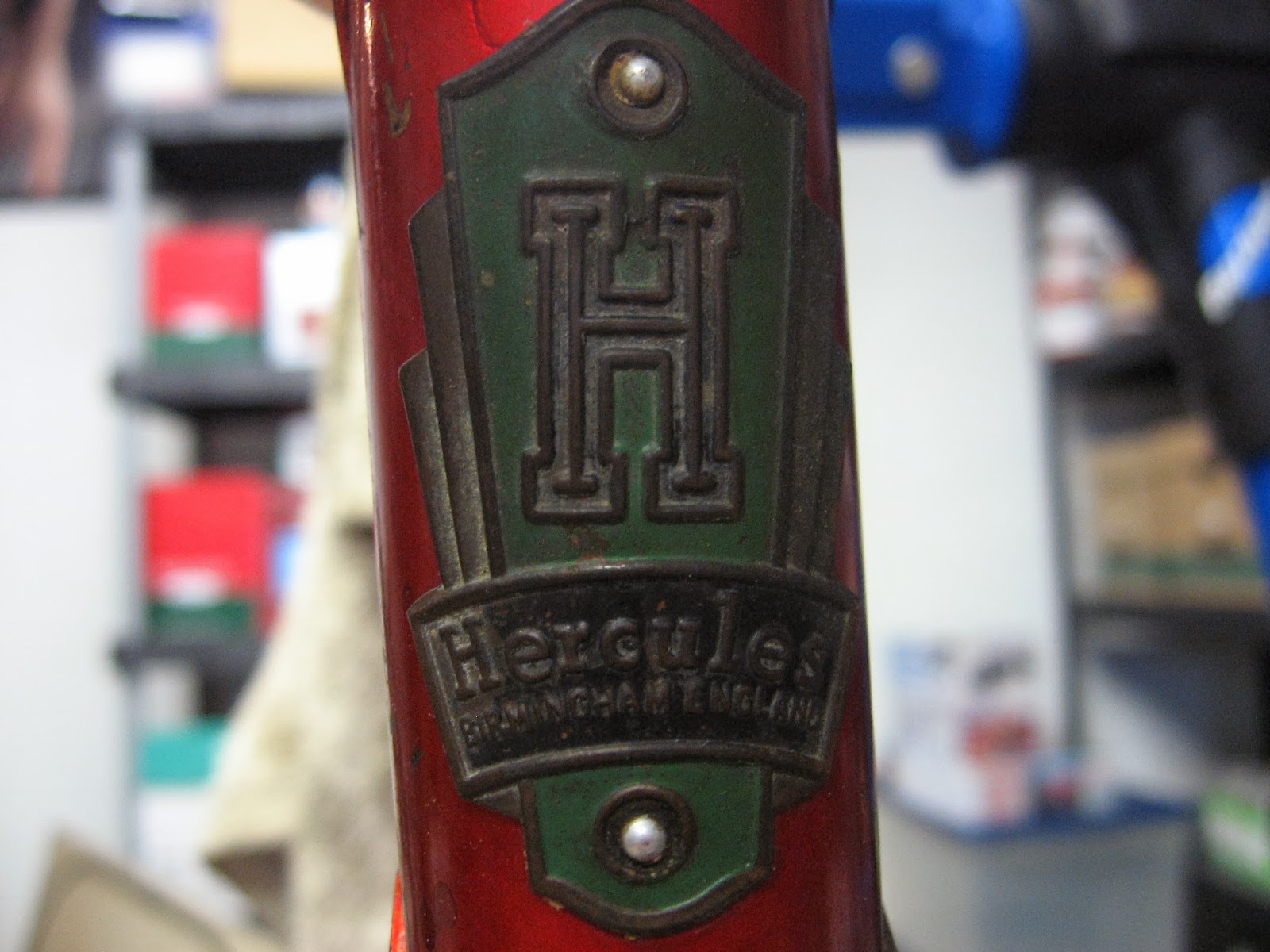 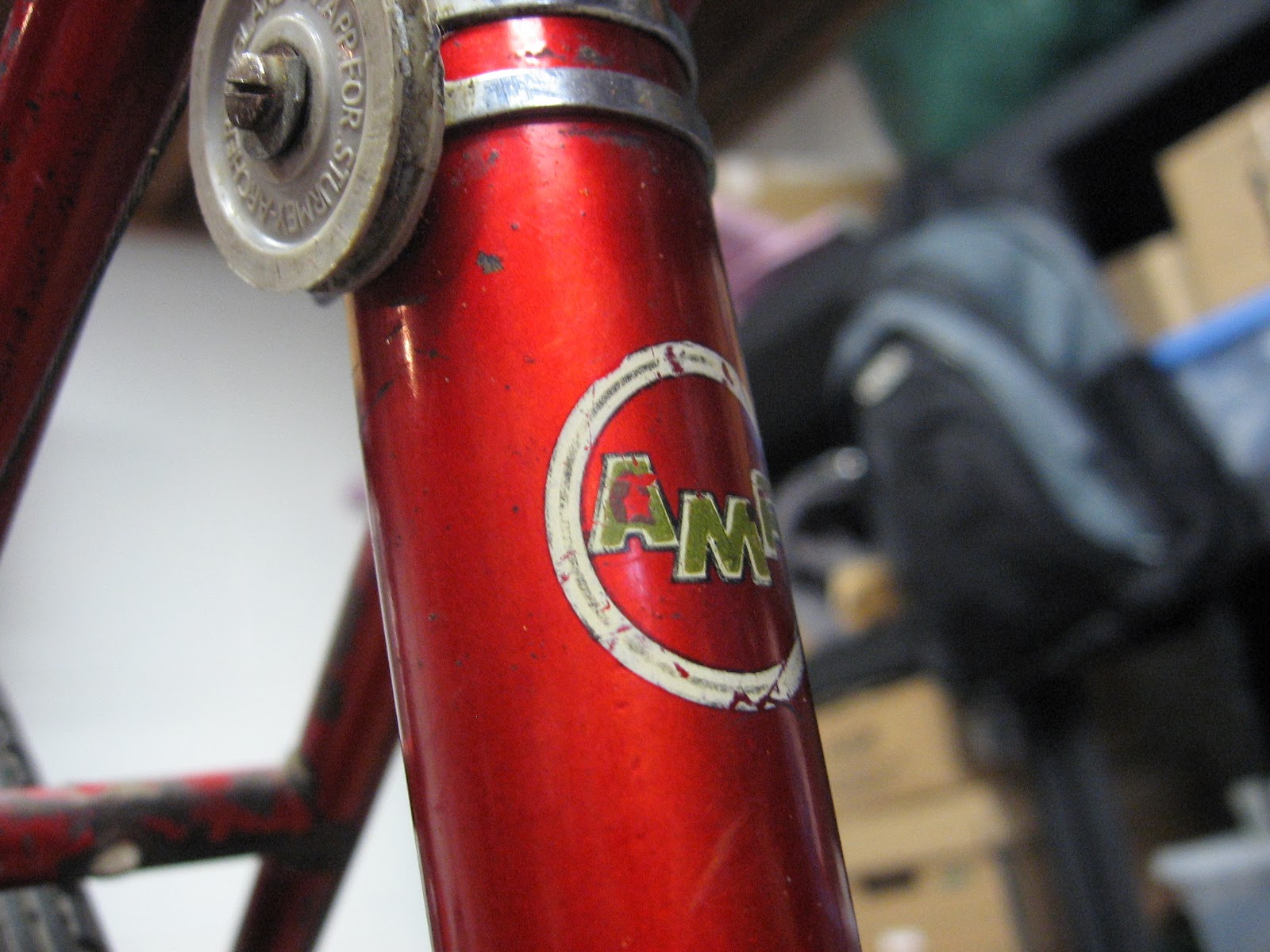 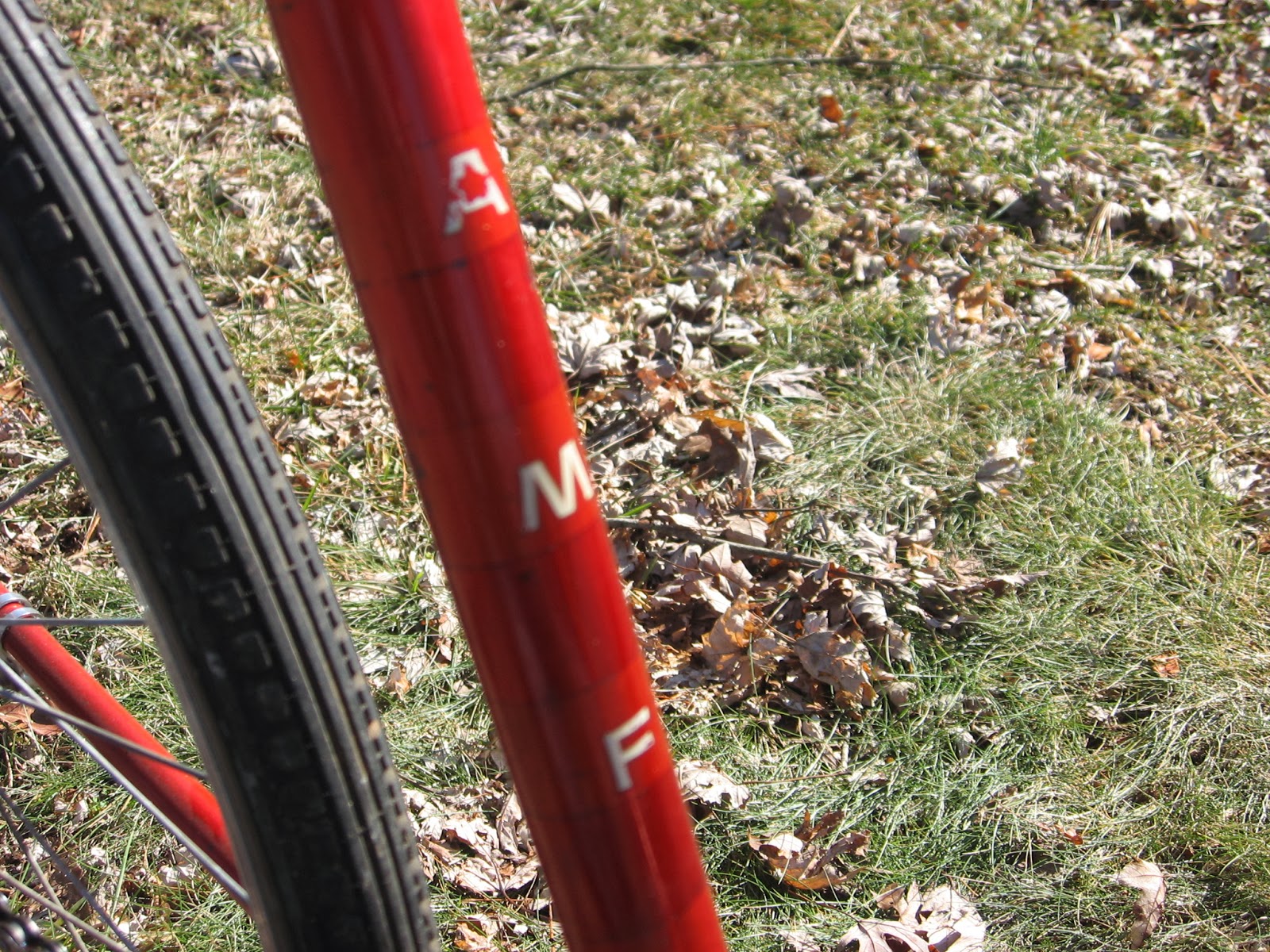 Plans are to check the frame and dropout alignment, rebuild the hubs, headset, and bottom brackets, replace the cables chain, and tires wheel truing, and general clean-up and de-rusting.  I've never rebuilt a TCW hub, it should be interesting.  I have read that these hubs are problematic when it comes to good braking, so we shall see.  I have a number of AW type hubs the could be used as a replacement if necessary, but I would like to see how a properly rebuilt and adjusted "TCW"  type hub performs.

For all the Coffeeneuring fans, this is a coffee mug and saucer bike bell purchased over the Holidays from the Wheel Base in Fredrick, MD.  The mug handle is the bell striker.  Surprisingly; it has a very nice tone. 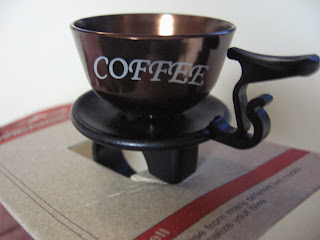 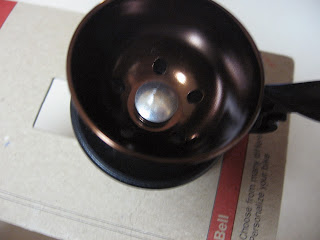 This is an excellent post from another blog.  Well worth reading for any 3-speed enthusiast.

﻿ Several hundred Plaid riders left from Franklin Square and rode to Kingman's Island for the Lumber Jack Smash lunch (hot cakes, eggs and bacon, hot chocolate and cider) and the Lumber Jack Games.  Much fun, here is a great Video of all the action.

Leather Saddle Bag for the Scorcher

Today I received the leather saddle bag I ordered from The Leather Bug.  This bag is handmade by Hein Olivier in Australia,  I have no financial interest in endorsing this product.  The workmanship is first class and all the fittings are quality stainless steel.  He has other bicycle products listed on his web site from handlebar bags to panniers.  Shipping took 10 business days to reach VA.

I've been searching for a unique Black leather bag that would suit the character of the Scorcher project bike.  I wanted something small to carry phone, keys, wallet, etc.  This bag is just large enough for carrying these items with some room left over for patch kit, tools etc. 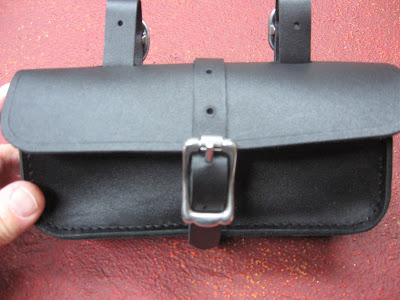 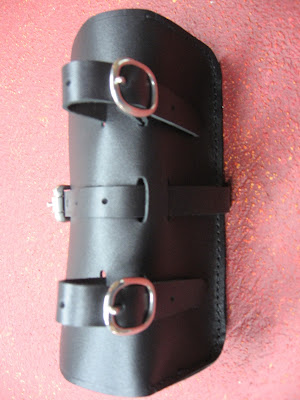 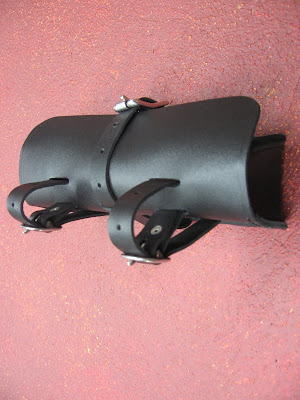 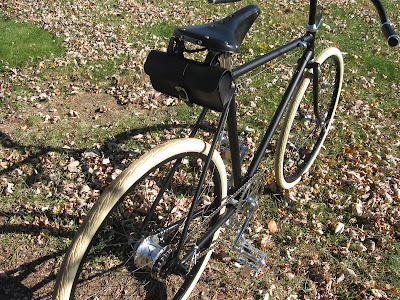 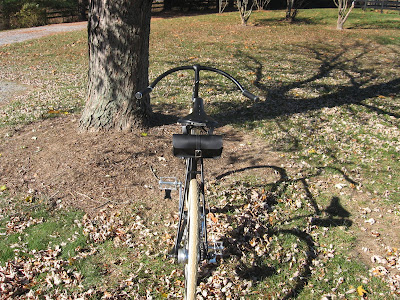 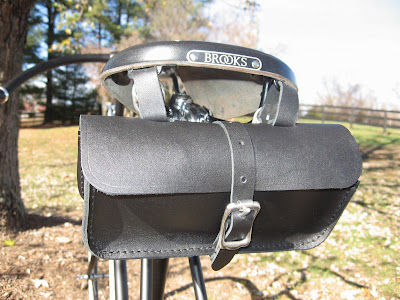 Email ThisBlogThis!Share to TwitterShare to FacebookShare to Pinterest
Labels: Scorcher

This past weekend I attended the Philadelphia Bike Expo.  One of the highlights of the show was a Schwinn Paramount display and seminar.  I was surprised to see some 3-speed versions of the Paramount.  I never realized that Sturmey-Archer hubs were fitted to the top of line Paramount model.  There was a Schwinn Paramount, model P-11, "Tourist", that could be ordered with a Sturmey-Archer hub and upright handlebars.  Here are some pictures of the two on display, both were early 1950's. 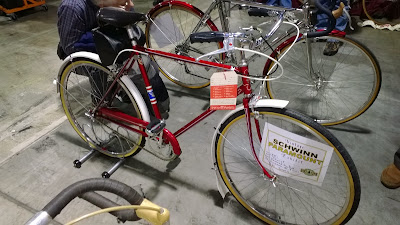 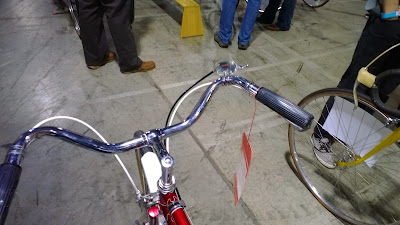 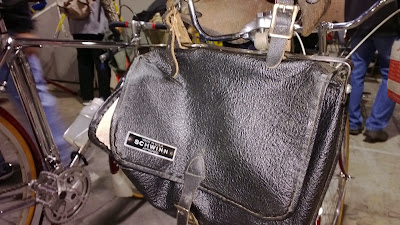 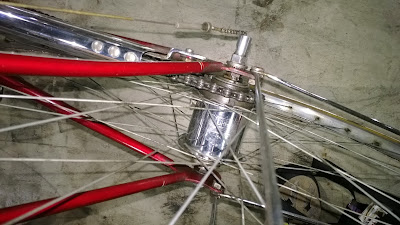 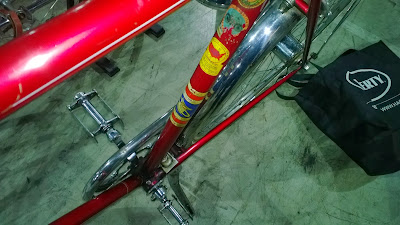 The Paramount's were hand built in a special shop using lightweight tubing, very similar to the Carlton/Raleigh relationship.  Lightweight bikes (Reynolds 531 tubing etc.) of the early 1950's with 110 mm rear drop out spacing for Sturmey-Archer hubs have always had a special interest to me. Peter C. Kohler has written excellent articles on the Raleigh lightweights such as the  Raleigh Record Ace (RRA) and the various Clubman type models.

Here is another example, the little known Carlton Corinthian: 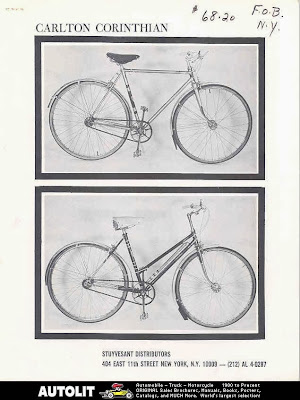 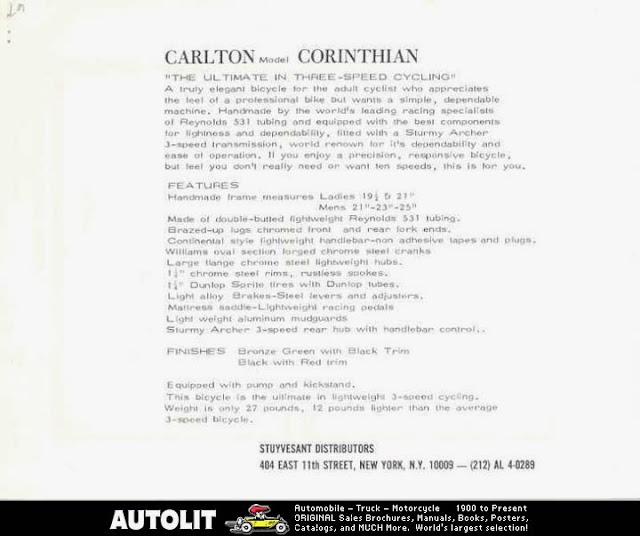 and now the Paramount P-11 Tourist. Today they are all very collect able and command high prices.  I have never owned or ridden any of them and probably never will, but I can't help but wonder if they actually ride that much better then a common Raleigh Sports 3-speed.  I guess it just matters what side of the fence you fall on, rider or collector, but I will continue looking for one I can afford.
Posted by Bob at 9:07 PM 1 comment: